The Meat We Eat

We have become a consume-without-care society.  We need to care about what we are eating, where it comes from and how it effects our health and the generations to come.

Meat is something that, as Americans, we tend to consume high quantities of.  Up until recently, no one really took the time to think about where the meats they were consuming actually came from.  Of course they came from cows, pigs and chickens, but where those animals were raised and how they were treated has been the least of our concerns.  What struck a chord with me was the documentary, "Food, Inc." Shortly after watching this is when I began to care more about what I was eating and where it was coming from.  Below, I touch upon some of the important issues with the conventional meat industry and what to look for if you would like to avoid them.

MEAT:
As most people should know, (at least I hope most know) our grocery stores today are filled with meats that come from mass producing factory cattle, chicken and pig farms.  Animals at these farms are treated very inhumanely and fed food that is pumped full of antibiotics to prevent the spread of disease, and growth hormones to make the animal grow twice as fast and much larger than they are naturally supposed to.

Chicken
For those of you that don't realize what is happening, an easy way to see an example is to take a moment to compare the size of chicken breasts in your local grocery store.  There are typically a couple options; some big name companies "conventional" chicken, or "natural" and "organic".   Take a moment to compare the size of the different chicken breasts next time you go grocery shopping.  You will notice the big name chicken breasts, i.e. Tyson or Perdu are HUGE.  They are not a normal size chicken breast, and bigger does not mean better.  The huge chicken breasts don't have any flavor, and they are a strange texture before cooking, and after cooking they are tough.  The chickens that are raised the "conventional" way are terribly mistreated.  They are placed in huge barns where there is little to no sunlight.  Many never see more light than what comes through the doorway when someone comes to supposedly care for the chickens.  Each chicken has no room to move, they are fed grains that are heavily laced with antibiotics.  Federal law has prohibited the use of hormones and steroids in all poultry.  Several of the chickens die due to their living conditions and are just left to be trampled until the barn is cleared for slaughter.  Then the new chickens arrive and the process starts all over.
The "natural" and "organic" chicken breasts, on the other hand, are much smaller; the size that a chicken breast should be.  If you go with an "organic" chicken, by law, they can not be given antibiotics and consume an organically grown diet. Now, there is controversy as to the treatment of these chickens as well.  Typically, if it is a big name company, they are fed the healthy diet, but are still treated poorly.  Do your research about where your chicken is coming from so that you know exactly the quality of life they have and what they are being fed.  It feels good to know!

Along with poor meat quality, the egg quality is equally effected.  Hens are kept in very tight cages.  In some situations, they clip their beaks to prevent cannibalism among the hens, as well as wing clipping.  So, the hens are mistreated and they produce low quality eggs.  Organic free-range eggs are much larger, the yolks are a deeper yellow and the flavor is far and wide much more rich than an industrial hen egg.  Again, do your research prior to buying so that you know exactly where the hens are raised and how they are cared for. 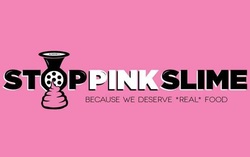 Beef
Now, let's talk about ground beef.  Not only is the beef coming from factory farms where the animals are treated poorly and fed hormones and antibiotics, but as it is being ground into ground beef, they are adding a filler commonly known as  "pink slime".  "Pink Slime" is also known as Lean Finely Textured Beef (LFTB).  They use the excess of the cow that normally wouldn't be used in ground beef and break it down through a process that uses heat in centrifuges to separate the fat from the meat in beef trimmings.  The resulting product is exposed to ammonia gas or citric acid to kill bacteria.  It has been reported as of March 2012, 70% of the ground beef sold in the U.S. contained "pink slime".  Ground beef is also allowed to contain as much as 25% of the additive.  Since March 2012, many supermarket chains have committed to not selling ground beef containing pink slime, although, I would still ask the butcher before you buy.  Last time I asked, there was only one type in the case that was "pink slime" free, and it was much more expensive.  It's certainly worth the price.   The alternative is buy your own steaks, and grind your own meat.  We have started doing this, and it is amazing how tasty our hamburgers and ground beef recipes are compared to the already ground meat at the store.

You also have to think about your steaks and roasts as well.  It is the same issue that we have with chicken.  "Conventional" beef is poorly treated animals pumped full of antibiotics and synthetic hormones to promote rapid growth, being mass produced and shuffled into a factory to be processed and shipped across the country to restaurants and grocery stores.  The meat does not taste as good and can be tough, flavorless and not juicy.  I will say it again....do your research.  Be aware of where your meat is coming from and how it was raised.

Pink Slime Wikipedia
inhabitat.com
What You Need To Know About the Beef You Eat 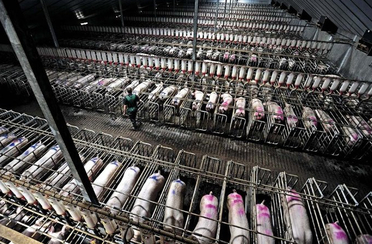 Pork
Pig farming is another issue.  The pigs are kept in very inhumane living conditions.  The sows are repeatedly bred, and confined to very tight living quarters to prevent squashing the piglets.  The piglets have their tails cut off to keep the other piglets from biting them which would lead to possible infection.  They are in caged areas with no straw or grass to lay in which they would normally root around in and keep them from wanting to bite one another.  The piglets are then weaned far too early from their mother in order for the mother to be bred again, and to feed the piglets a diet to fatten them up much faster than they would naturally.  Pigs are very smart animals, and studies have revealed that they do become depressed in such poor living conditions.  This won't be the last time I say it.....find out where you meat is coming from.  Research their living conditions  and what they are fed. It makes a tremendous difference.


There is an unrealistic perception that the animals we eat come from farms like this!
Unfortunately, these images are not reality for what is in most grocery stores.

Next time you are shopping for meat, have a conversation with the meat counter attendant.  Find out where your meat is coming from.  Ask if there is pink slime in the ground beef.  You will be sadly surprised that it is still sold in many stores.  If your options are not up to your standards, start researching your community's options.  Find a local co-op and buy locally raised meats directly from the farmer.  It is quite rewarding buying food from the person that has cared for and raised what you are putting on your table.  You feel good about your choices and what you are feeding your family.